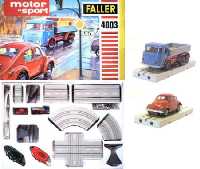 My career started in 1976 when my parents presented my brother and me a new Faller AMS 4003 package, which consisted of a 8-type track, a flatbed truck and a red VW beetle. It was an ideal completion to our Märklin HO electric railroad and fit good into the layout.
But after a while we discovered the charme of the independent slotracing. That was racing not in the meaning of real race cars and speed, but playing real street-situations made fun.
Well, we grew up and year after year our track and car stock grew also.
When Faller stopped producing the street-line of cars, we purchased the new (imported from Aurora) AFX-line of race cars and additional race track. We produced some good layouts (see Past Tracks) but sometime forgot the old slotcars and went to more interesting things ...

I got an adult, moved to a suburb of cologne, got married and then had to tidy up my parent's attic with all the good old toys we've used in our childhood. And then found and decided to keep the old Faller AMS track with a couple of cars - maybe sometimes, when I'll get some children, they'd like to play with it like their dad has done before. So I crawled through the net, to look for spare parts to get the old cars running again. And found nothing! Faller has stopped production of slotcars and was taken over by POLA, another model kit producer.
What a pity! But some day I got in contact with eBay.de (former alando.de) and didn't trust my eyes, while looking at all the goodies, offered in an dedicated Faller AMS category ...
From now on, my life got a new meaning ;-)

The first thing, I discovered was Bauer, a producer of HO scale slotcars. The cars are more slim than the old Faller AMS, but have got much more details and are looking much nicer. And are equipped with a TJet chassis.
TJet - what is that? So I started to search again and found a whole bunch of information about the US counterpart of Faller AMS.

I found out, that eBay is international and detected a huge area of slotcar categories - didn't know, that HO slotracing is one of the most famous hobbies of US people. Saw very nice cars there and got an idea of all these US slotcars. Purchased some of them, but exchange rates were very high, so the cars were expensive.

At least I found out that there are also nice repro cars. Johnny Ligtning from Playing Mantis was a good example. Tuned with the right wheels and tires you can get nice little cars, that are not expensive.


Now I'm trading on eBay like a pro and got nice little beauties from all over the world - but always street cars or sports/muscle cars.

Racing with all these magnet-monsters is not my my kind of slot-hobby. A little sliding makes much more fun ;-)