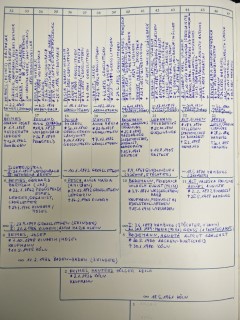 My first contact with genealogy was around 1996: my aunt Ingrid gave a ancestors-book to my wife and me as a present for our marriage. This book lists my ancestors - for parts of them down to the 17th century.

I knew that my aunt was an expert in genealogy, because she married a "von Lepel" and researched his noble familytree even down to the 13th century. But our common family?

It turned out, that she was supplementing my grandpa's researches for our family. He - as well as almost everybody in 3rd Reich - was required to prove ancestry of the family for x generations.
In addition, he was anxious to prove ancestry of my grandma (his wife), who had ancestors with the name "Luther". His research revealed that she was no direct descendant of famous "Martin Luther", but he crawled through a lot of centuries into the past.

So, my dad's family was already researched well...

My grandpa died in 1975, my aunt became older and my interest in genealogy grew more and more - especially as my mother's family had not had a detailed research yet.
Beside that, there was also the statement that my Great-Great-Grandpa "Isbrand" was immigrated from Iceland: "Mr. Isbrand from Iceland" was a common saying in my mom's family.
OK, I decided to start with researching in that small amount of time left beside my job and my other hobbies. But where to start, how to start?

In the end, the start of my activities was by internet or by connecting to my relatives: collect and analyse family documents, search at the later saints, research of individuals or documents at parish registers and registry offices, last but not least also contacting archives - via email or locally e. g. at the "Personenstandsregister des Rheinlandes" (at that time still in Br?hl).

In the course of researching my wife's family (almost no infos at that time), I found the possibility to get scans of old parish registers on DVD - the Patrimonium Scriptum Verlag (publisher's) already had a large collection. Additionally, I came acrosse the collection of the WGfF (Family-Books, indices of parish registers etc.) as well as many other sources - mostly detected by internet research.

Beside all that, Tom Pick's analysis of the later saints data for the Eifel (Eifeldatabase) was a good help for me, because the "Heimes" family's originated from the area around the river Moselle/volcano Eifel. As soon as I found a direct ancestor, I usually tried to get official proof from churches, registration offices or archives.

I found many unknown ancestors, collected a lot of documents and finally put everything as a family-tree into ancestry, sorted and linked to additional content available there. Primary management of my family-tree is done there (or at home with a synchronized version of FamilyTreeMaker) - for reporting and and other gimmicks, I use additional software, which is usually on GEDCOM-exports of the tree.
Thus, the version of my tree that is displayed here is also GEDCOM-based.

Some time ago, my aunt also died - thus, currently I'm the only one left to crawl though all these suitcases of personal legacy: Photo albums, letters, official documents, poetry and much more. No clue how long it will take to get though all this stuff...